Australian housing has faced some monumental changes over the last 25 years. If you’re currently looking to move, you need to make sure to stay up to date on the latest trends.

Two decades ago, the Australian housing dream was rather simple. A quarter-acre block, a house, and a backyard were enough to satisfy the needs of most. However, many things have changed since then.

Many people have experienced these changes firsthand, but there are still some who aren’t aware of them until they look at the numbers. This is exactly the focus of this article. You’ll get the chance to see all the dramatic changes that have led to the current situation.

Aussies lead significantly different lifestyles today than decades ago. Convenience is one of the major factors that resulted in the boom in apartment living. Let’s crunch some number to give you a detailed picture.

The Increase in Apartment Living

Over the course of the last 25 years, a staggering number of people decided to switch from a house to an apartment. In fact, occupied apartments experienced a rise of 78% in this period. This adds up to 1,214,372 occupied dwellings.

Almost 2 million Aussies have realised that the many benefits of living in an apartment. Let’s go over some of them to give you an idea of why this is the case.

It seems as if a large number of people have come to the conclusion that they don’t actually need a lot of space. Generally, houses offer a lot more of it, but people have started to realise that it might be more of an overkill. Either that or they figured out that they could make do with less.

This has even caused the average floor space of houses to go down. At 189.8 square metres, it’s currently at a 20-year low. This shows that families and individuals are moving towards having less space.

Maintenance seems to be one of the main factors that influence this. Unless you go for a huge apartment, it’s generally easier to take care of an apartment than a house.

Many Aussies are moving closer to city centres. This is a main reason why today around 47% of all homes are apartments. Many lifestyle changes over the last 25 years have made this happen.

Let’s take Melbourne as an example, where an increasing number of people wants to live near the Central Business District (CBD). Working professionals want to stay as close to their workplace as possible, and the youths want to experience the vibrant lifestyle.

This isn’t really possible if you live in a house 20km or more away from the city centre. This is a trend that isn’t likely to go away as long as the city is thriving. You can expect the number of people who want to live as close to the centre as possible to rise even further. 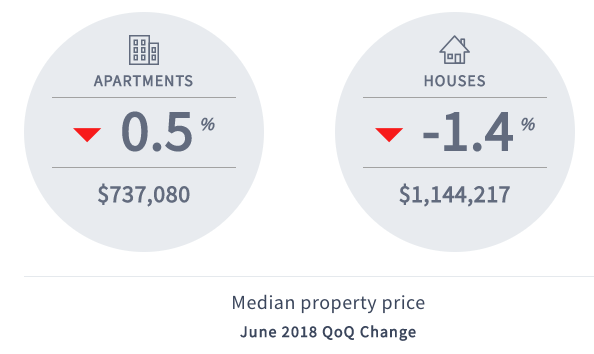 According to the Domain House Price Report March Quarter 2018, the median price of houses in Sydney was $1,144,217. In contrast, the median apartment price was $737,081. As you can see, this is a huge difference, and it doesn’t apply to just Sydney but other parts of Australia as well.

It’s not just about the cost of the apartment itself. People can save up on gas, maintenance, and many other aspects of their everyday life.

Moreover, there is another thing that has changed significantly. Owning a home seems to be less of a dream now than 25 years ago. So what does this mean to you?

This is the dilemma that many people face today. With the fluctuations in housing market, it’s often hard to decide between owning and renting a home.

Even though there are benefits to both of these options, Aussies seem to prefer renting. Over the last 25 years, the number of people who own a home has declined by 10%. While it’s true that renting is getting increasingly more expensive, property prices in the major cities have also gone up, which makes renting a lot more affordable in the short term.

So why are people renting? Before getting to the reasons, let’s discuss the pros and cons of renting and owning.

Whether to rent or buy really boils down to your personal goals and preferences. However, there are some aspects of renting that sound much more appealing than owning a home:

Despite the increase in rent, renting is still cheaper than owning a home. Many people who can’t afford to put up the down payment for a home in a certain area can often afford to rent it instead. It is also not easy to qualify for a home loan. As of the beginning of 2018, the average home loan in Australia is a staggering $500,400.

You would probably have to come up with a down payment of 10-20% to even attempt to buy the home.

Renting offers more flexibility that home ownership. Found a good job in another city? It’s a lot easier to pay a penalty and terminate the lease than to sell your home. The same goes for if you don’t like the location anymore, or need more/less space.

This is especially important when you’re young. You never know what opportunities may open. This is why you may not want to tie yourself down to an area.

So, there are two major reasons why people decide to rent instead of buy. However, it’s not all shiny. There’s a pretty big issue with renting – instability.

The reason behind this is that tenants can’t really influence the rent period. Even though there is a rental agreement, it is usually short term and the landlord has a lot of power over you. This can be a huge issue for families that need a stable home.

This is one of the problems that home ownership fixes. Let’s take a look at the main benefits of buying a home.

Although it’s not that popular of a choice anymore, there are still people who prefer to have their own home. Their main reasons are:

If you rent, the home will never be yours. This means that you’re at the mercy of your landlord. Unfortunately, not all of them are willing to help you out. When something breaks, many of them simply don’t care. This means extra money that you need to spend on repairs, even though it should be the landlord’s purview.

Moreover, all it takes is for one person to offer more money and you’re out. As mentioned, tenants don’t really have much power, so your landlord gets to decide the length of your rent period.

This doesn’t happen if you buy a home. Once you do, it’s all yours and you can rest assured knowing that everything is up to you.

After buying a home, many Aussies find out that the repayments are much higher than the rent that they’re accustomed to paying. At first glance, this might seem like a bad financial decision. However, that’s not necessarily the case.

Research shows that Australians that own their own homes are 2.5 to 4 times better off financially. This is because property prices in Australia have been on an uptrend for decades. Unless something goes terribly wrong, a home can increase your net worth.

Even though these benefits seem appealing, owning a home still isn’t that popular. As you can imagine, the main reason for this is the price. You have seen the amount of an average loan in Australia. Fewer and fewer Australians can afford the down payment or qualify for a sizable home loan.

The expenses don’t even end here, here are some additional costs of owning a home:

All of this can take away a large sum from your monthly earnings, which is why renting is much cheaper and more convenient.

Of course, the decision is ultimately yours. However, there’s a form of home ownership that can only be beneficial, if you play your cards right.

Property investment is very popular in Australia. This is true today even when the average value of dwellings has dropped by 0.3% compared to last year.

Australian housing market has grown nationally by 16.7% in the last 10 years. As a general rule, this kind of growth is usually followed by a period stagnation or decline. Considering how unsustainable the growth has been, this is completely normal.

For this reason, it might be a good idea to invest in property now. The longer you wait, the longer you risk missing the chance. Despite the predictions, you never know when prices might go up. This means that you can miss the opportunity to buy at a lower price.

A thing that is pretty much certain is that the market will grow again at one point or another. It’s really just a matter of time. If you invest now, you stand to earn a significant amount of money.

Many successful investors advise that you invest as soon as you can afford it, not when the market lets you. The market will never be perfect, so you should consider investing any chance you get. If you find a good property, there’s no doubt that you can expect good profits.

Hopefully, you now have a better idea of the current situation in apartment living. You will then be able to make informed decisions regarding your future. Of course, there’s still a lot to take into account, but this article should give you an overview of the current state of things.

If you’re moving, consider the benefits and drawbacks of renting and buying a home. Even though the trends are in the favour of renting, owning a home might be more suitable for you. And if you’re not buying a home to live in but rather as an investment, make sure to do your research and not rush the process. The success or lack thereof will depend on your ability to make good investment decisions.

Whether you’re buying or renting, you’re going to need some new furniture. Luxo Living stocks a wide range of items for furnishing your new home.

Thank you for subscribing.

An email should be sent to you soon with your coupon code.